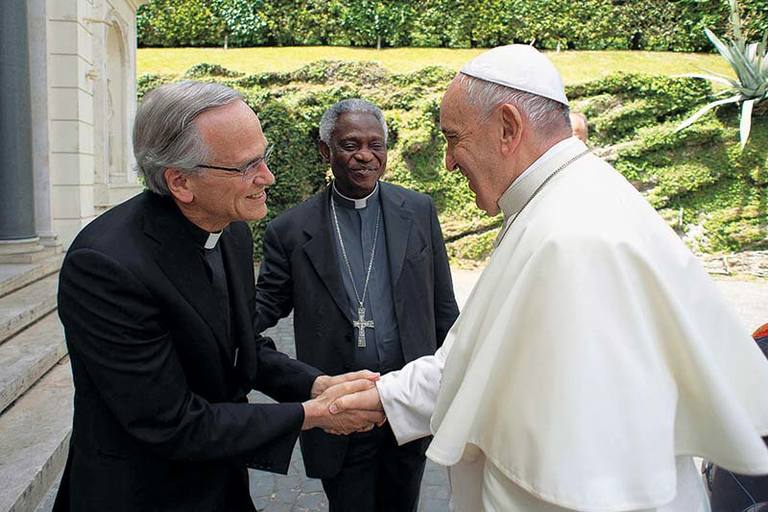 Pope Francis sought Notre Dame’s help in co-sponsoring with the Vatican a historic summit in Rome called “The Energy Transition and Care for Our Common Home.” Pope Francis addressed executives from among the world’s leading energy producers and investors, saying: “Dear friends, time is running out! Deliberations must go beyond mere exploration of what can be done, and concentrate on what needs to be done, starting today. We do not have the luxury of waiting for others to step forward, or of prioritizing short-term economic benefits. The climate crisis requires our decisive action, here and now, and the Church is fully committed to playing her part.” Rev. John I. Jenkins, C.S.C., noted: “Collectively, these leaders will influence the planet’s future, perhaps more than any in the world. I am deeply grateful for their commitment to the transition to a low-carbon future while providing the energy needed to support the integral human development of every member of the human family.” Most participants signed statements of support for carbon pricing and disclosures on climate change risk. 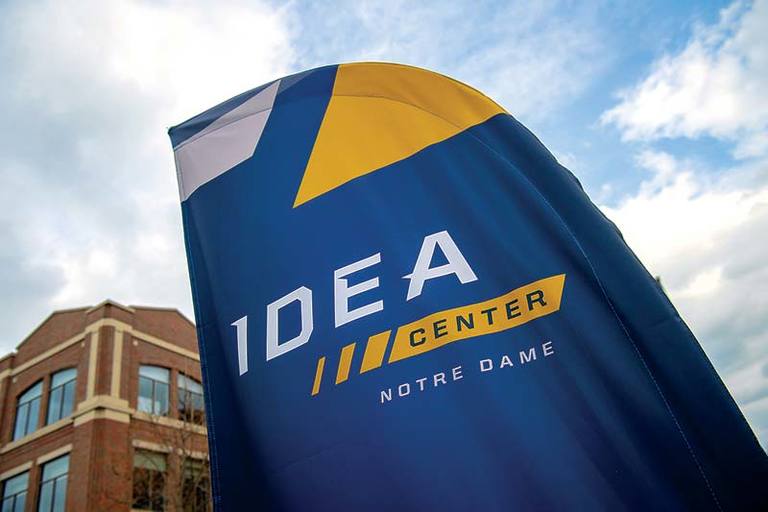 In just its first year, the IDEA Center at Innovation Park launched 27 companies, nearly equaling the number of startups, 33, in the University’s history. To qualify as a startup, companies must be licensed as a business, have a business plan and management team, and have completed the IDEA Center’s “de-risking” process, which assesses innovative ideas for their market potential. The 27 startups include companies involved in health care, information technology, law, and media. Collectively, they raised more than $4 million in investments or grants, created 83 new jobs, launched 23 products, and generated more than $500,000 in sales. Thirty-one of the 55 startup company founders were Notre Dame students. 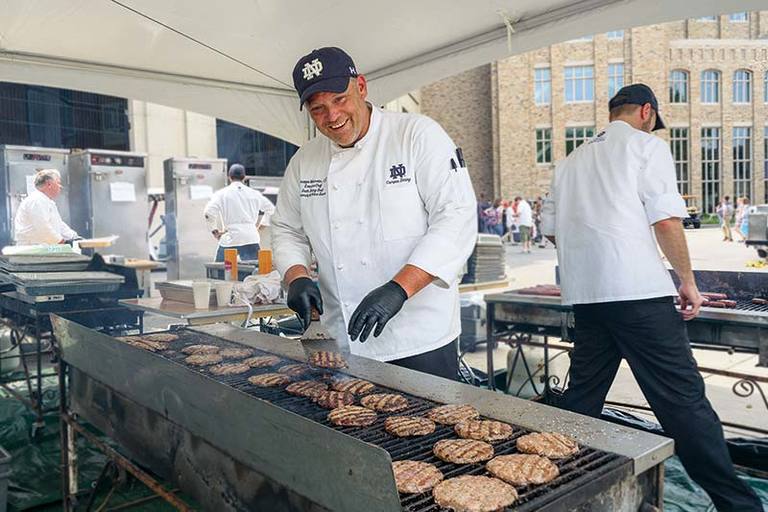 A “great” place to work

For the seventh time in a decade, the Chronicle of Higher Education recognized Notre Dame in its “Great Colleges to Work For” survey. The University ranked among the best American research universities in nine categories: compensation and benefits; confidence in senior leadership; facilities, workspace, and security; job satisfaction; respect and appreciation; supervisor/department chair relationship; teaching environment (for faculty); tenure clarity and process (for faculty); and work/life balance.

Notre Dame Press published the first English translation of the Nobel Prize-winning Russian writer Aleksandr Solzhenitsyn’s memoir Between Two Millstones, Book 1: Sketches of Exile, 1974–1978. Widely regarded as one of the most important authors of the 20th century, Solzhenitsyn won the Nobel for literature in 1970, and his 1973 masterpiece The Gulag Archipelago exposed the system of forced labor camps in the Soviet Union. His son, Ignat, a renowned conductor and pianist, spoke at a Notre Dame conference to celebrate the book’s launch.

Notre Dame is among just 11 institutions to be named a top producer for both the Fulbright U.S. Student and Scholar Programs for the 2018–19 academic year, a first for the University. Notre Dame was tied for seventh among all research institutions in Fulbright student grants with 24, ahead of Harvard, Columbia, Stanford, and Duke, and tied for eighth in Fulbright scholar grants with six. This is the fifth consecutive year that Notre Dame has ranked among the top producers for the Student Program, which is the government’s flagship international exchange program. 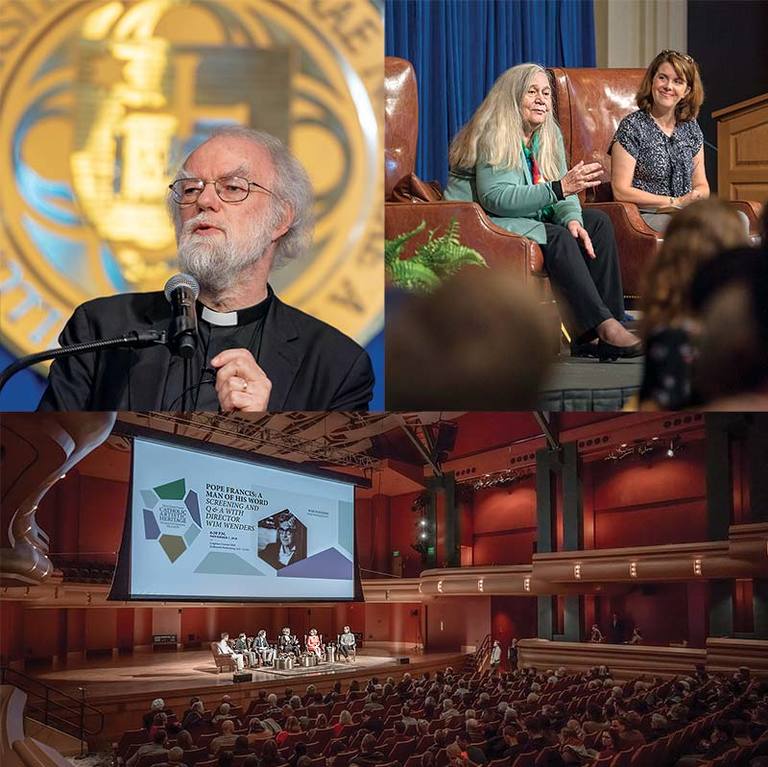 Forum examines Catholicism and the arts

The 2018–19 Notre Dame Forum, “The Catholic Artistic Heritage: Bringing Forth Treasures New and Old,” was inspired by the New Testament parable that compares the Kingdom of Heaven to the owner of a household who shares treasures both ancient and current. Among the forum’s speakers were the Pulitzer Prize–winning novelist Marilynne Robinson, renowned theologian and former Archbishop of Canterbury Rowan Williams, and the acclaimed filmmaker Wim Wenders, who screened his newest documentary, Pope Francis: A Man of His Word.

Notre Dame researchers received $180.6 million in research awards— $100 million more than a decade ago and a more than 27 percent increase from the previous year. The awards are supporting a diverse array of projects that tackle globally significant issues such as vector-borne diseases, cancer, psychology, nanotechnology, and hypersonics. The largest award was $21.5 million—part of a larger $42.4 million, five-year commitment—from Lilly Endowment Inc. for the formation of the Labs for Industry Futures and Transformation (LIFT) Network, an initiative to enhance and link cuttingedge expertise, technologies, workforce development programs, and innovation-based facilities throughout the South Bend–Elkhart region. 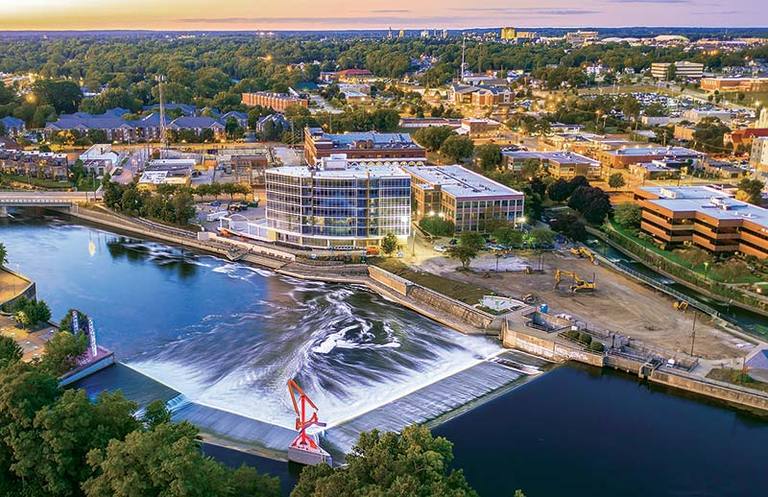 The University unveiled several energy-related projects that are a part of its ambitious plan to discontinue the use of coal and cut its carbon footprint in half by 2030. The initiatives include the installation of three solar arrays, construction of a 30,000-square-foot East Plant for thermal energy production, the groundbreaking on a hydroelectric generation facility on the dam in the St. Joseph River in downtown South Bend, a new natural gas line into campus, two new combustion gas turbines, and green roofs on the Morris Inn, Duncan Student Center, Corbett Family Hall, O’Neill Hall, and Joyce Center, the latter of which is the largest in the state. The projects made it possible for Notre Dame to discontinue the use of coal in its power plant a year ahead of schedule. Despite the growth of campus, the University has decreased carbon dioxide emissions by 50 percent per gross square foot based on 2005 levels, and aspires to reduce emissions by 83% by 2050.

University President Rev. John I. Jenkins, C.S.C., presented both the 2018 and 2019 Notre Dame Awards within a span of eight months. In October, the 2018 award recognized the Colectivo Solecito de Veracruz, a group of mothers in Mexico’s gulf state of Veracruz, organized to search for their missing loved ones in the face of criminal violence and state inactivity. Father Jenkins traveled to Lviv, Ukraine, in June to honor Ukrainian Catholic Archbishop Borys Gudziak with the 2019 Notre Dame Award for his work for religious and academic freedom, and for his courageous and visionary leadership of the first Catholic university established in the territory of the former Soviet Union. 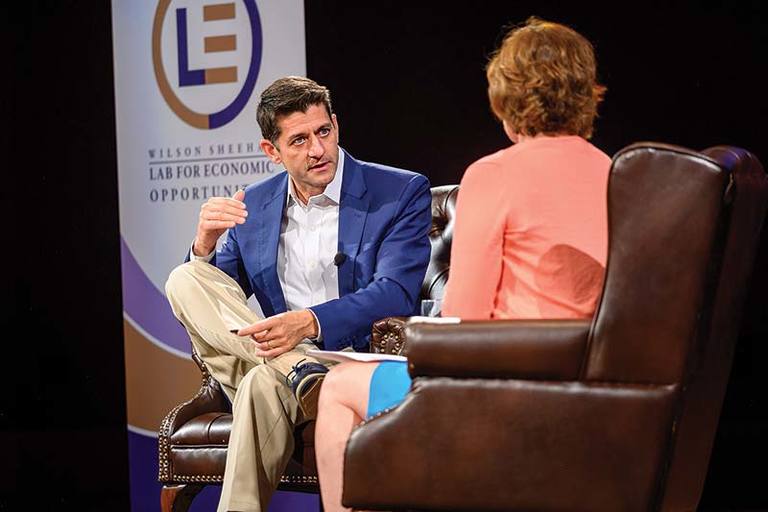 From DC to ND

Former Speaker of the US House of Representatives Paul Ryan joined the Notre Dame faculty as a professor of the practice as a guest lecturer in political science and economics. Other recent professor-of-the-practice appointees are former US Sen. Joe Donnelly and former White House Chief of Staff Denis McDonough. Like Ryan, they bring experience at the senior-most levels of government, providing Notre Dame students with firsthand knowledge and insights that are difficult to find elsewhere. 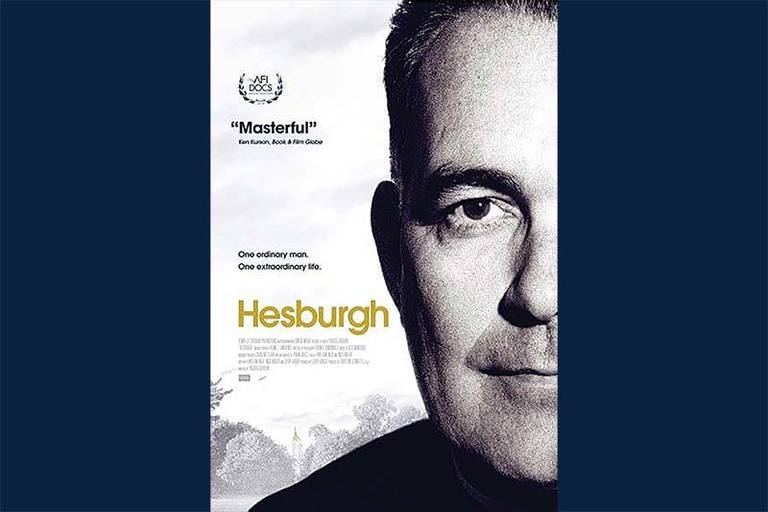 Father Ted on the big screen

A new documentary profiling the remarkable life and legacy of the late Notre Dame President Rev. Theodore M. Hesburgh, C.S.C., played in theaters nationwide. Directed by Notre Dame alumnus Patrick Creadon ’89, Hesburgh details Father Ted’s role as the University’s president from 1952 to 1987, his work as a charter member of the U.S. Commission on Civil Rights as well as his contributions to 15 other presidential commissions, and his service to four popes and the Catholic Church. The 104-minute film was produced by Jerry Barca, a 1999 Notre Dame alumnus, and Christine O’Malley and includes interviews with Father Hesburgh’s successors, Rev. Edward A. Malloy, C.S.C., and Rev. John I. Jenkins, C.S.C., as well as many other campus, national, and worldwide leaders. 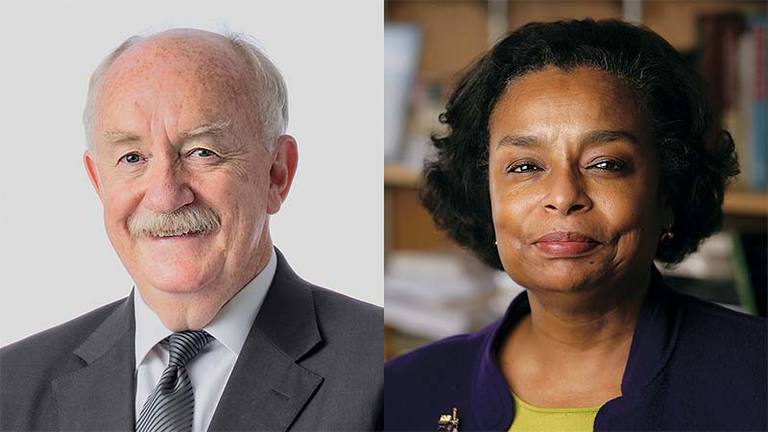 Two Notre Dame faculty members—Declan Kiberd and Dianne Pinderhughes—were elected to the American Academy of Arts and Sciences, joining 25 others from Notre Dame in one of the nation’s oldest and most prestigious learned societies and independent policy research centers. Kiberd, the Donald and Marilyn Keough Professor of Irish Studies and professor of English, is a major figure in the field of Irish studies. Pinderhughes, chair of the Department of Africana Studies and a professor in the Department of Political Science, analyzes racial, ethnic, and gender issues associated with political participation in the American political system, and in comparative perspective. Since its founding during the American Revolution by John Adams, James Bowdoin, John Hancock, and other scholar-patriots, the academy has elected leading “thinkers and doers” from each generation, including George Washington and Benjamin Franklin in the 18th century, Daniel Webster and Ralph Waldo Emerson in the 19th, and Albert Einstein and Winston Churchill in the 20th. 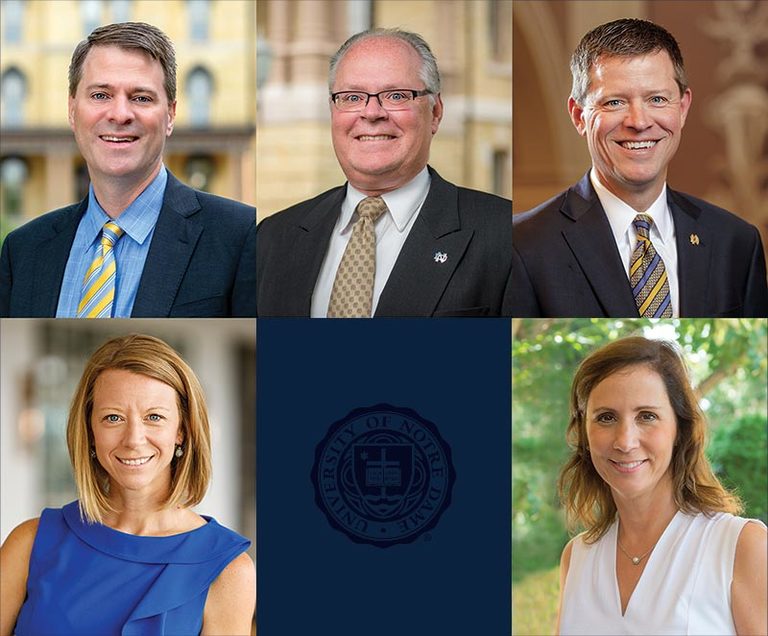 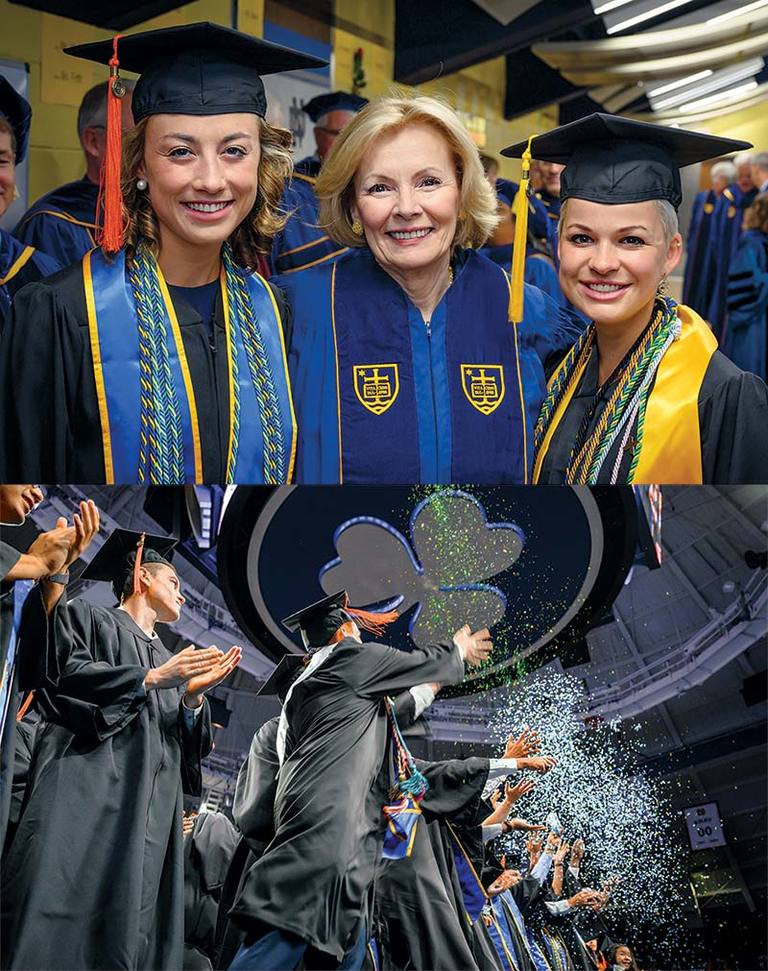 A stormy, but inspiring, send-off

Notre Dame’s 174th University Commencement Ceremony was moved at the last minute from Notre Dame Stadium to the Joyce Center due to inclement weather. The Class of 2019 heard from commencement speaker Peggy Noonan, a Pulitzer Prize–winning author, columnist, and former presidential speechwriter; Laetare Medalist Norman Francis, the former president of Xavier University in New Orleans who has previously received two honorary degrees from Notre Dame; valedictorian Sofia Carozza of South Bend; and salutatorian and St. Louis native Annelise Gill-Wiehl, who delivered the invocation. It was the first time in Notre Dame’s history that the commencement speaker, valedictorian, and salutatorian were all women. 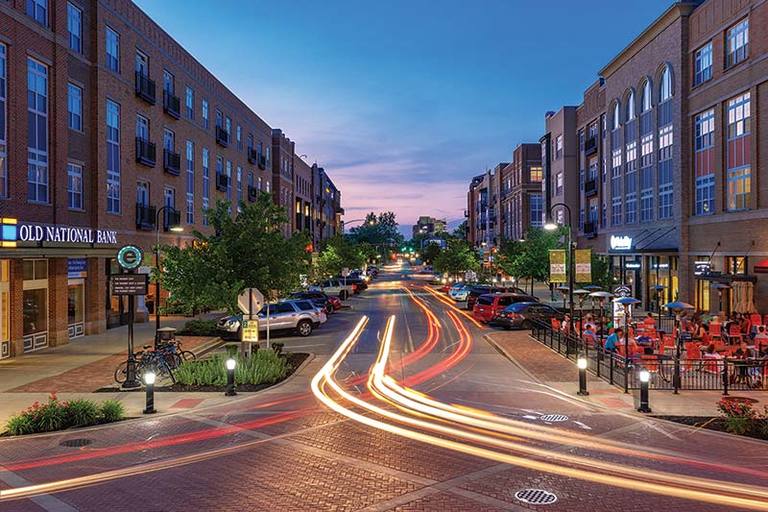 The University conducts an economic impact study every five years, seeking to quantify its impact on the region through operational and capital investments; research spending; spending by students, visitors, and event attendees; and increased wage premium. The latest iteration of the study, released in October 2018, found Notre Dame’s impact on the local economy is $2.46 billion annually. Previous studies have focused on South Bend and St. Joseph County. With the University’s growing partnerships through the broader region, the 2018 report expanded its reach to measure Notre Dame’s effect on Elkhart and Marshall counties also.